A new survey of public opinion on abortion was released today, with a focus on the attitudes of the Millennial generation (age 18 to 29). Much of the coverage has been on the finding that, while acceptance of same sex marriage is steadily increasing among younger generations, young adults are no more likely than their parents to say abortion should be legal.

The other important story in the data: Many Americans have complex, conflicted views on abortion and how they articulate these views often depends on how the question is asked.

As has been the case for most of the last decade, the majority (56%) of Americans say that abortion should be legal in all or most cases. But the “most cases” part? It includes a lot fewer cases than you might think. 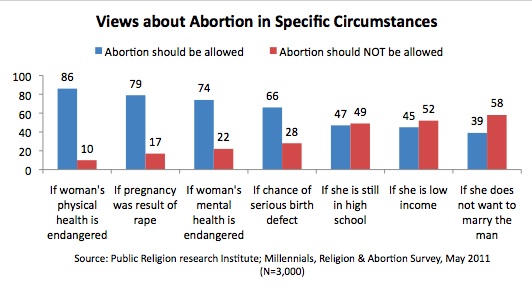 “Most cases” that end in abortion are more like the last three columns in this graph than the first four, but support for allowing abortion in these cases is 10 to 15 percentage points less than 56%. I’m sure support would be even lower for cases where the woman is financially comfortable (31% of abortions), already has children (60%), or is married (15%) (stats from the Guttmacher Institute).

Almost 30% of people have very mixed views on when abortion should be permitted and are in favor of allowing it in some circumstances but against allowing it in others. But this group classifies themselves inconsistently when asked to summarize their views: about half say abortion should be legal in all or most cases and half say it should be illegal in all or most cases, even though all of them have solidly mixed views when asked about specific circumstances.

Labels are another source of confusion: 37% of those surveyed either identify themselves with both the labels “pro-choice” and “pro-life” or reject both labels.

Speaking of labels, it seems people have succeeded in making the “Millennials” thing happen. I’m still not sold on it as a name for my generation (at 29, I’m on the very front end), but it’s definitely better than “Gen Y”.

Committed to Availability, Conflicted About Morality: What the Millenial Generation Tells Us about the Future of the Abortion Debate and the Culture Wars
Public Religion Research Institute // Robert P. Jones, Daniel Cox, Rachel Laser // June 9, 2011

The Policy Brief offers a research-based, data-driven take on the political issues of the day.