In the depths of the recession, from October 2008 to April 2009, around 700,000 people lost their jobs every month. Many of these workers remained jobless for long stretches of time, as this downturn produced the highest levels of long-term unemployment in six decades. Yet even those who found new jobs relatively quickly have experienced lasting setbacks. Two years after losing their jobs, workers who are reemployed are earning 17% less than they previously made, according to a new analysis by the Brookings Institution’s Hamilton Project. The lost income averages about $600 per month.

END_OF_DOCUMENT_TOKEN_TO_BE_REPLACED

I’ve been focusing my posts this week on unemployment and what we can do to address it. Previously I provided an overview of the current situation and looked at the causes of unemployment.

Last night, President Obama presented the American people and a joint session of Congress with his plan for tackling unemployment and spurring economic growth. He repeatedly exhorted Congress to pass his package, The American Jobs Act, “right away.” Should they? Here’s a look at the main components of his plan and whether or not they’re likely to help create jobs…
END_OF_DOCUMENT_TOKEN_TO_BE_REPLACED

In anticipation of President Obama’s major jobs speech tonight, I’m focusing my posts this week on unemployment and what we can do to address it. Earlier I gave an overview of the situation in 10 Essential Facts About Our Unemployment Crisis. In today’s post, I try to understand where exactly the problem lies.

The recession officially ended in mid-2009 when we halted our economic freefall and slowly started to turn the ship around. But the recovery has progressed more sluggishly than people imagined it would – and slower than previous recoveries – and unemployment still stands at 9.1%. With the recession officially over for two years now, what is holding back employment from returning to pre-recession levels?

END_OF_DOCUMENT_TOKEN_TO_BE_REPLACED

There was little economic news for American workers to celebrate this Labor Day, given the dismal employment statistics released by the Bureau of Labor Statistics on Friday. This Thursday night, President Obama will respond with a major speech on his plans to improve the economy and specifically to boost job growth. With that in mind, I’ve decided to focus my posts this week on jobs and unemployment. To start off, here are 10 key facts you should know about our current unemployment crisis…

END_OF_DOCUMENT_TOKEN_TO_BE_REPLACED

Why have some states, like Texas and North Dakota, weathered the recession much better than others, like Arizona and Florida? According to new report from Goldman Sachs (not available online but summarized here and here), three key factors protected certain states from the worst of the recession:

These three factors explain nearly three-fourths of the difference in job performance among states since the recession began.

What didn’t matter? States’ tax and spending policies. Goldman’s research found that the  size of a state’s spending and its income and property tax rates had no relationship with that state’s job picture. Whether other government activities, like regulatory structures or investment in job development programs matter wasn’t covered in any descriptions of the report I read.

These findings should give pause to those who argue that tax and spending policies, in and of themselves, are responsible for recent job trends at the state level. Two recent examples of this line of thinking: (1) the Rick Perry campaign’s claim that miracle job growth in Texas is due in part to tax cuts and spending reductions (2) the Heritage Foundation’s suggestion that poor job growth Illinois is due to its plan to increase tax rates. The Goldman report suggests that focusing on strengthening the housing and mortgage markets and cultivating key industries may be more valuable for states than tinkering with taxes and spending.

This troubling 2:1 ratio isn’t unique to the Recession. According to a new report from the Center for American Progress (CAP), “The black unemployment rate tends to be about double that of whites, regardless of the economic climate.” The unemployment rate when the Recession was just beginning at the end of 2007, for example, was 8.4% among African Americans, 2.1 times the rate among whites (4.1%). 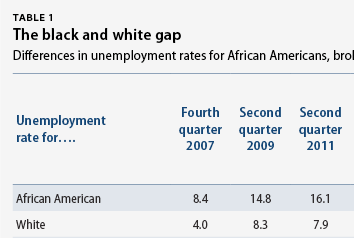 Source: Center for American Progress, "The Black and White Labor Gap in America," 2011.

While the Recession has forced a greater share of African Americans into unemployment (an increase of 8 percentage points versus 4 for whites), the size of the overall disparity has remained the same. Black and white unemployment rates are both about double what they were when the Recession started: the current rate among African Americans is 1.92 times what it was at the end of 2007; for whites the ratio is 1.98.

The CAP report provides some evidence that African Americans may be experiencing the phenomenon known as “first fired, last hired” that has been seen in other recessions. White unemployment rates have dropped slightly (by 0.4 percentage points) since the recovery officially began in mid-2009, while black unemployment has continued to grow (up 1.3 percentage points).

While all of this data is disturbing, one figure in particular caught my eye. The latest national unemployment number – 9.2% – that has people freaking out? That was the exact unemployment rate among African American men in 2007, before the Recession began.

(Note: I didn’t discuss the unemployment rates for other racial or ethnic groups because the CAP report focuses on blacks and whites. In case you’re curious, the current rate among Asians is 6.8% and among Hispanics of all racial backgrounds is 11.5% (these are the only two other racial/ethnic groups BLS reports separate statistics for).)

Writing in the National Journal, Ronald Brownstein explores an interesting dynamic of the recession: young adults are facing devastating unemployment rates while older worker have barely been affected.

The employment rate among older Americans (55+) is almost exactly what it was before the recession (see the graph below). The main cause: many older workers saw their retirement savings evaporate during the crisis and aren’t ready to leave the work force yet. Meanwhile, the recession hit young adults harder than any other age group, in part because of the decrease in job openings made available by older people leaving the work force. 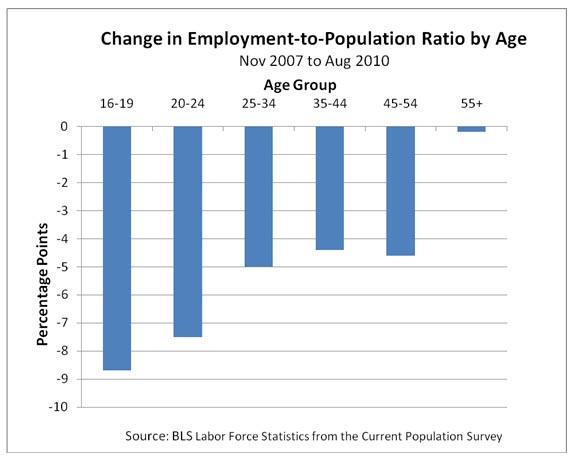 Graph by The Brookings Institution

Some unemployed young adults are using this down time to increase their education and skills base. But Brownstein says we’ve also seen a concerning increase in “idleness” – young people who are neither working nor in school. Workers of all ages, if they want to receive Social Security checks and other benefits in the future, have an interest in ensuring young adults get off into working life on the right foot.

The Policy Brief offers a research-based, data-driven take on the political issues of the day.