Last night, the White House offered an “enhanced broadcast” of the State of the Union address that had graphs, statistics, and other images playing alongside Obama’s speech. It’s a pretty cool concept, offering a way to make the speech more interesting and to provide important context on what was being said. The execution of the idea was a mixed bag – some of it was really valuable while other parts were irrelevant or downright silly. 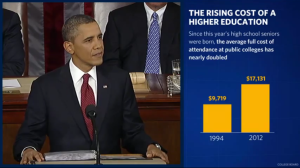 The best graphics added important context to what Obama was saying, like this shot that played as Obama said, “We can’t just keep subsidizing skyrocketing tuition.” (22:45)

Or this graph showing increasing wealth inequality as Obama said, “Folks at the top saw their incomes rise like never before, but most hard-working Americans struggled.” (5:50 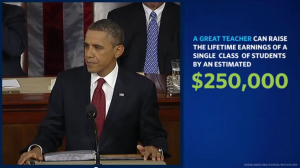 Other images just repeated what Obama was saying in his speech. Sometimes this was valuable, like when the graphic emphasized a statistic I hadn’t heard before on education (20:50). They even included a citation in very tiny print at the bottom, so viewers can go find the original source if they want. 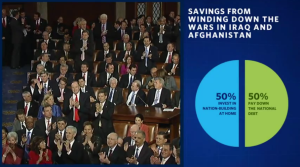 But other times the infographic wizards seemed to take things a bit too literally. Obama exhorted Congress to, “Take the money we’re no longer spending at war, use half of it to pay down our debt and use the rest to do some nation-building here at home.” (35:20) Voila – a meaningless pie chart!

Some of the juxtapositions of video and graphics didn’t work so well. As Obama was talking about innovation and supporting entrepreneurs who, “aspire to be the next Steve Jobs,” the camera cut to a shot of Jobs’ widow (26:15). On the enhanced side we saw a graph showing that 64% of new jobs come from small businesses. While plenty of people admire Steve Jobs, I don’t think anyone would consider Apple a small business.

At times the graphics didn’t really add anything, they just seemed like inspirational filler to keep the slide show moving. Here’s Obama and Biden talking to some guy while looking at a bunch of solar panels. (30:45)

Here’s Obama surrounded by barns, pickup trucks and American flags during the closing moments of the speech. (1:04:25) 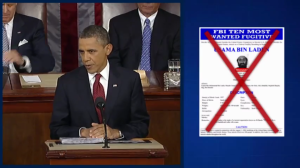 One of the cheesiest images of the night cued up early in the speech as Obama said, “For the first time in two decades, Osama bin Laden is not a threat to this country,” and the room bursts into applause. (1:30) Bam, FBI wanted poster with a big red X through it!


But my vote for the silliest, most awesome visuals of the night came at the 18:30 mark. Obama wants cut through the Pac-man like maze of confusing job training programs to, “turn our unemployment system into a reemployment system.” (cue applause!) 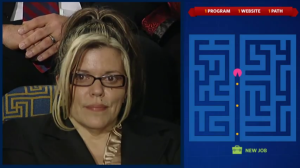 While it wasn’t perfect, I do think this is a cool effort on the part of the White House. I’d love to see news networks do something like this so that it’s not just a bunch of graphs and statistics cherry-picked by Obama’s team. Data presented visually can be really powerful, and a heck of a lot more meaningful than some of the other technology gimmicks news networks have been trying out (I’m looking at you CNN).